Grant Fund among the best 30th anniversary projects in Poland! 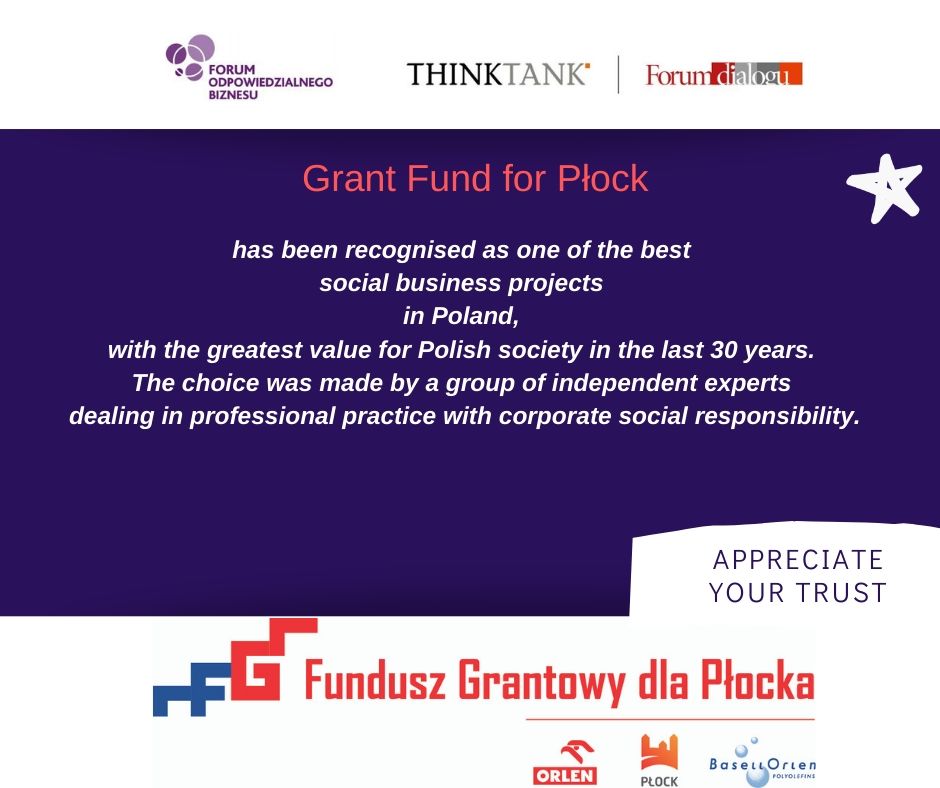 16th October 2019 “Grant Fund for Płock” has been recognised as one of the best social business projects in Poland, with the greatest value for Polish society in the last 30 years. The choice was made by a group of independent experts dealing in professional practice with corporate social responsibility.

A total of 180 social initiatives were selected for voting, both local and nationwide. Among them, experts who understand the challenges of corporate social responsibility and sustainable development, as well as persons holding official positions related to CSR issues, have chosen the most valuable ones. In total, 60 projects were selected: 30 local and 30 nationwide. The experts, by selecting projects in each of the two categories, gave their votes to the most valuable ones. The group of people who were invited to vote was selected by the organisers. The announcement of lists of the best projects in both categories took place on 10 October this year in Warsaw, during the conference “Social business challenges after 30 years of free market economy in Poland”, organised by the Center for International Relations, THINKTANK centre and the Ministry of Investment and Development.

– Entrepreneurs in Poland are co-authors of the success of the last 30 years of our history. Our ranking shows that the sum of their social involvement gives measurable results, that without this contribution many social problems would be worse and the image of business would not be as positive as it is today – says Zbigniew Gajewski, Partner at THINKTANK and project leader.

The ranking of business social initiatives, which experts believe had the greatest value for society in 1989-2019, was organised by the Center for Dialogue and Analysis of THINTANK in cooperation with the Responsible Business Forum and the Academy for the Development of Philanthropy, as part of the project “30th Anniversary of Free Market Economy in Poland. Business, what’s next?”

– List of winning initiatives is as diverse as the challenges that the responsible business takes, contributing to greater social cohesion and sustainable development of Poland. There are educational and environmental programs here, activities for excluded groups, aimed at increasing road safety or related to new technologies. The ranking is a kind of summary of the past 30 years of free market economy from the perspective of the idea of CSR. Congratulations to all companies whose good practices were included in the list and thus can be an inspiration for further valuable initiatives – said Marzena Strzelczak, director of the Responsible Business Forum.

Let us remind you that the “Grant Fund for Płock” F is a cross-sectoral partnership project that originates from the “Forum for Płock” – an initiative that in 2002 integrated representatives of the authorities of Płock, PKN ORLEN and the United Nations Development Organization (UNDP). At that time, the project involved nearly 50 local organisations, residents as well as local government and business representatives to cooperate. In such a cross-sectional composition, development priorities for the city were created for nearly half a year. The cooperation resulted in the adoption of the “Strategy for Sustainable Development of Płock”. However, during one of the Forum’s meetings in 2003, the idea was born to establish the Grant Fund as a stable financial base for Płock non-governmental organisations supporting the goals of the “Strategy”. The project was joined by: The City of Płock, PKN ORLEN, Levi Strauss and UNDP. After three editions of grant competitions related to financial support for the local community, UNDP transferred the administration of an already mature project to the hands of local business and local government. Then, in 2005, a decision was made to create the Foundation. Basell ORLEN Polyolefins joined the group of founders next to the Municipality of Płock and PKN ORLEN, while Levi Strauss withdrew for formal and legal reasons. However, the Levis Foundation – through its grant competition – again began to support the Fund from Płock from 2011.

Thanks to the support and systematic cooperation of the founders, the “Grant Fund for Płock” Foundation has been continuously financing and settling grants transferred to NGOs in Płock for almost 16 years. It also initiates its own projects that hit social niches. In 2015, it implemented a new competition, thanks to which projects can be financed and implemented by individuals and informal groups.

The Grant Fund for Płock is a unique example in Poland and internationally of creating partner relations between local government and business. It is also the project initiator, inspiring local community to achieve the goals of sustainable development. It also provides strong support for local NGOs by offering them the opportunity to finance interesting, interdisciplinary tasks that go beyond the standard competition frameworks.