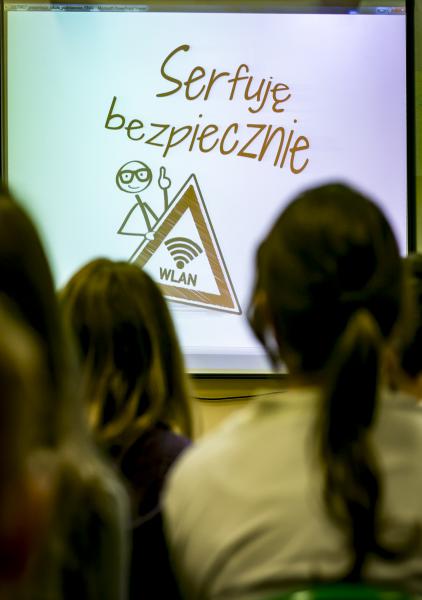 Nearly 400 trained students from 16 elementary and junior high schools in Płock, over 130 participants in the field game in the city of Płock, as well as several dozen parents who learned how to protect their child in the network, is the current balance of the campaign “Surfing Safely”. The project, which arouses great interest among education specialists, as well as other schools and additional classes are already halfway completed.

The “Surfing Safely” campaign is an educational program implemented by the Foundation “Grant Fund for Płock” under the patronage of the Children’s Rights Ombudsman and Mazowiecki Education Superintendent. The aim of the program is to educate children aged 10-15 and their parents and carers in the field of network security. Until October 3 this year as part of the campaign, 16 workshops for students and 8 workshops for parents and carers took place. In October there will be another 16 meetings.

“Such classes should be obligatory”, so the workshops for parents in terms of ensuring the safety of children on the Internet, were assessed by their participants. “The parents were terrified after classes. They did not realize how many threats were lurking for children every day. Unfortunately, according to the analyzes coming from the previous meetings, the carers are not interested in what their children do online. Although it is satisfactory to try to talk to them, control the time they spend online, they unfortunately do not know what else they could do to protect their charges. That’s why in our classes we not only show what dangers the network carries, but also educate how to use the available tools of parental control in a reasonable way “, emphasize the project implementation campaign organizers.

“In everyday life, at home, at work, as well as at school, modern devices and the Internet are used on an increasing scale. However, each innovation carries with it a danger, especially for the youngest users. Therefore, children of school age who are the most likely to become victims of cyberbullying should be under special control. Classes from the “Surfing Safely” campaign make you aware of how to avoid such threats. In a child-friendly way, they discuss problems related to the improper use of the Internet. They teach making the right decisions, encourage discussion and develop skills useful in adult life. They promote wise and safe use of the web. For us – teachers are excellent educational and educational help “– summarizes the campaign of Ms. Małgorzata Roszko, Deputy Director of Primary School No. 1 for them.

“We would like to thank very much the parents who came to the first meetings we organize in schools, but also to encourage other carers to participate. According to our previous meetings and conversations, parents very often do not realize that children on the web spend many hours a day, because they have access to the Internet not only by the computer, but also by phone. Interestingly, about 80% of our children aged 10-13, who we are training, do not see a problem with making an appointment with a person met only online. In addition, all these people agreed that they would not tell their parents that they are going to a meeting. Whether parents are aware of the consequences of having an appointment a 10-year-old (i) with a person met only online? During classes, we try to make children aware of the consequences of specific behaviors in the network “, the specialists who lead the meetings stated.

If you are interested in participating in parent / guardian activities, we encourage you to visit the fanpage of the “Surfing Safely” campaign on Facebook (www.facebook.com/serfujebezpiecznie).

The event under the name “Workshops for parents” includes all the dates and places of the next 12 meetings. You should register for the workshops by contacting the organizers via a fanpage. You can also apply to the management in Płock schools, where the campaign is organized.

Workshops for parents are not everything. The element of the campaign are also the above mentioned workshops for pupils, conducted in an unconventional manner involving participants. According to the assumptions, 20 such meetings with students will take place until the end of the campaign. Thanks to these activities, nearly 600 students can learn how to increase their security online and, therefore, how to counter Internet threats.

As part of the “Surfing Safely” campaign, a city game was also organized. Its first edition took place on the last Saturday of September, where more than 130 people (in 20 teams) took part in the fun, during which they covered about 5 km of the route. Participants visited a few points on which they solved interesting educational tasks in the subject of the campaign. As they say, it was a good and very nice time spent on a sunny Saturday. The next edition of the game will also take place on Saturday, but this time on October 21. The organizers invite 5-7-person teams to participate in the game. Details on the event can also be found on the fan page: www.facebook.com/serfujebezpiecznie